For the past five years, Crown Verity has been a proud sponsor of the Annual British BBQ Battle, pitting top British chefs against each other in four categories. It’s a crowd-pleasing showcase that mixes culinary brilliance and taste-tempting dishes with some good-natured rivalry. Crown Verity Founder, Bill Verity, was once again one of the featured judges at this premier event.

Held at the historic and prestigious Blenheim Palace – birthplace of Sir Winston Churchill and one of the location settings for the latest James Bond movie Spectre – the 5th Annual British BBQ Battle was, by all accounts, a resounding success.

Top British chefs competed in four categories: Pubs, Bars & Restaurants, Leisure & Contract Caterers, University and Hotel. This year also saw the introduction of “The People’s Vote”, which let spectators select their favorite top chef based on the criteria of their choice.

Before Round 1 got underway, Ben Bartlett (aka BBQ Ben) took the stage for a BBQ Masterclass to share some tips and hints for a better BBQ and also a few creative recipe ideas like Watermelon Pizza and Donuts. Ben then joined the other judges: Crown Verity Founder Bill Verity, Chairman of the British Culinary Foundation Jim Eaves and 2015 winner Albion Taverna.

Each contestant had their own cooking station which included a Crown Verity MCB-30, supplied by the UK’s exclusive distributor RH Hall. Judging criteria included taste, texture and appearance as well as individual use of the Crown Verity BBQ.

In a unanimous decision, the judges selected Martin Wheeler of University of Reading as the 2016 British BBQ Battle Champion. “The Crown Verity BBQs that we used are fantastic,” said Martin. “I can’t wait to try out some new dishes (on them). It was a brilliant day and to win was just amazing.”

“It was very tough to judge this year,” said Bill. “It was extremely competitive and the presentations were simply fantastic. What impressed me the most was the creative use of the Crown Verity BBQs by all the contestants. I’m already looking forward to next year’s event.” 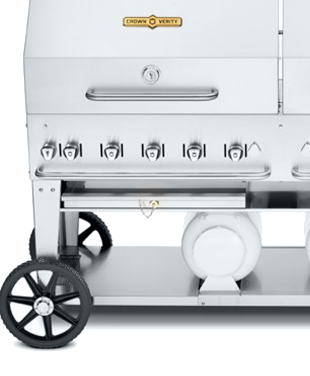